Ara Deg 2020 almost happened – but when the pandemic came we invited some of the musicians to Bethesda in any case to document their songs in the surrounding landscape and industrial scenery of Eryri.

This is a miniature digital version of the festival that never was.

Welcoming an audience was an impossibly – but remarkably Neuadd Ogwen – now a community performance venue and Bethesda’s historical Cinema space, was turned into a film studio instead.

N’famady a balafon master and traditional drummer from Guinea, West Africa. The first balafon instrument was discovered by the King of Susu, Soumaoro Kanté (11th century of the Ancient African Empire), and it was given to the griot Bala Fassèké Kouyaté.

The Kouyatés have been a significant family of storytellers for generations. N’famady is a direct descendant, and one of the stars of the succession of the Mandingue. Here’s Nafamady in various locations in Bethesda backed by his Balafon, Guitar and MacBook Pro.

Cerys Hafana hails from Machynlleth and can be seen here singing outside her Nain’s old house in Bethesda.

Using the triple harp nods to the traditional music of Wales but her production is starkly universal and speaks directly and honestly to our worrisome age by channeling the past and creating new forms.

Her debut album Cwmwl is available on all known streams.

Gruff volunteered to be a test case for the film and sound crew in their endeavour to capture a socially distant version of Ara Deg and of Bethesda in general. Straight out of lockdown in the early days of easing, here he sings two solo renditions of songs from his latest album PANG!

Brìghde Chaimbeul is a radical piper from Scotland. Embracing the drone and enriching her tradition by cultivating informal aspects and experimenting with, for example, Eastern European influences.

She released her first album, The Reeling in 2019 on Rough Trade Records.

On his latest solo recording Telyn Rawn, Rhodri Davies – one of the century’s most radical Harpists, revives the medieval Welsh harp of the title and reintroduces our ears to the sound of plucked horse hair through contemporary improvisation.

On this his first visit to Bethesda Rhodri used the wind of Moel Faban to further explore the instrument. With a foot in the Fluxus art movement that rejects product all together and another in the deep topography of his pop band Hen Ogledd – Rhodri’s cultural influence is international and multi faceted.

Keep an ear out for his label Amgen and his involvement in the NAWR events in Swansea. 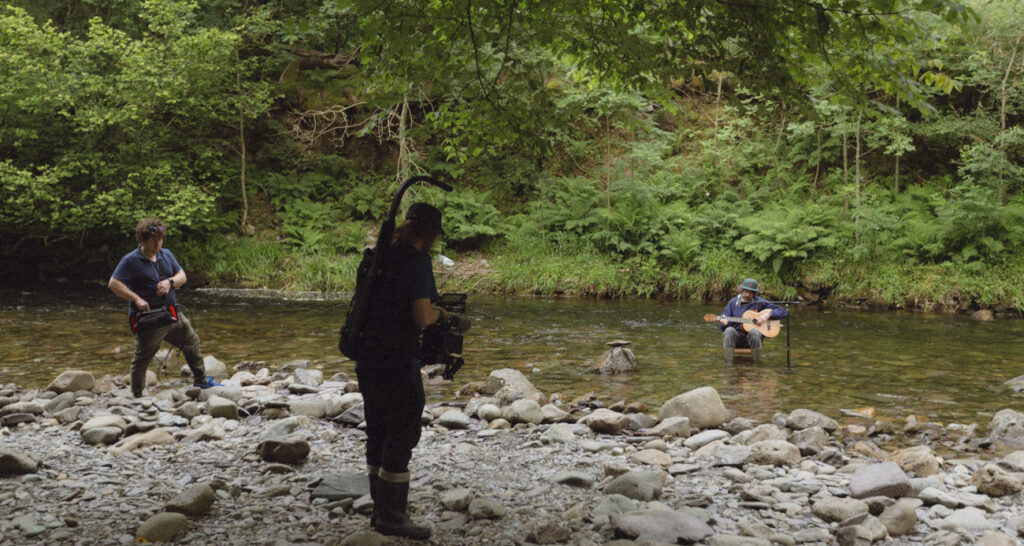 There is a turn in Afon Ogwen here, with Felin Sarnau on one bank and Dol Ddafydd on the other,
and it is a popular spot for anglers in the area to try to catch salmon, whiting or trout.

From here, at the top of the Nant Ffrancon, a spectacular view of Afon Ogwen
snakes its way down towards Bethesda.

The building served as a market and public hall, where the quarrymen held their meetings
during the 1900-03 Great Strike at Penrhyn Quarry.

Residents in the area would have long used the paths through this open space between
Tanysgafell, Pen-y-ffriddoedd, Bodfeurig and Sling.

The mountain is thought to be named after an old chief named Mabon or Maban. On the mountain are cairns, roundhouses and fields dating to the Bronze and Iron Ages.
At the foot of the mountain, above Cilfodan, is Pen-y-gaer, an Iron Age hill fort.

The trees that cover a large part of the valley floor are part of an old oak forest
that stretched seamlessly from Nant Ffrancon to Aberogwen.

The drovers would drive cattle along the old lane past this area up
Nant Ffrancon on their way to sell in English towns.

The bar was famous locally for the singing, with many members of the Penrhyn Male Voice Choir being customers.
Caradog Prichard, the famous Bethesda-born writer and poet, used to stay at Y Fic when he was visiting his home town.

It provided a platform for cultural activities such as Eisteddfod Gadeiriol Dyffryn Ogwen,
fun evenings, and performances of local drama companies.

Location: Bryntirion near Pantdreiniog - where Cerys Nan used to live

This land was named because it is west facing and in full sun,
and houses were built here for Chwarel Pantdreiniog workers.

It was also a cinema and bingo hall before the building was renovated
and converted into our community hall – Neuadd Ogwen – in 1988.

The building was converted into a community arts center in 2014.

A quarry famous for its red slate, and one of the many fine old quarries
that dot the slopes of this side of the valley.

Made possible with support from…